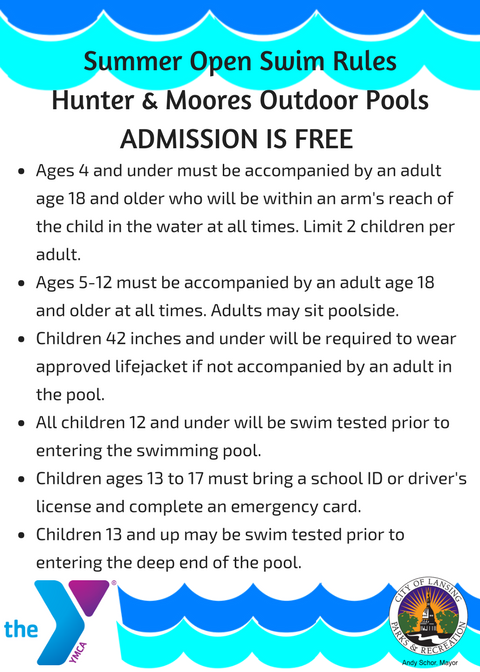 The Moores Park Pool opens June 10. It is FREE admission and has open swim from 1-4pm and 5-8pm seven days a week, beginning June 10 and running until August 18. It is open to resident and non-residents of Lansing. There are showers and lockers available.  The YMCA is also staffing the pool again this year. Please be aware of the open swim rules posted here.

The complete pool information is in the Lansing Living Summer 2019 publication.

Moores Park Pool has stood since 1922, at the eastern edge of Moores Park. It was funded using funds from the J.H. Moores estate , the Lansing developer who made the park and pool a reality, citing the importance of such places in the community. It opened in the hot summer of 1923 and dedicated on September 1, 1923.

The "J. H. Moores Memorial Natatorium" is significant as the prototype of the "Bintz Pool" patented by Wesley Bintz. Mr. Bintz was the City Engineer at the time the pool was commissioned.  He resigned in the same year to devote his career exclusively to swimming pool designs. His pool was designed as an ovoid, entirely above ground structure containing lockers, showers, pumping and filtering equipment below the deck. This type of pool found wide acceptance across the United States and hundreds were built in the 1920s, 1930s, and 1940s, but is now one of the last remaining pools being used.

On the 25th anniversary of the pool's opening in 1948 the city recreation department director estimated that half a million people had used the pool. Many of our neighbors will remember the high usage that continued into the 1960s and '70s when long lines of children waited on benches in front of the pool for their "shift's" turn to go in.

Celebrations of the pool were held again on the 50th and 75th anniversaries. During all these years the use of the pool has been free to the children and continues to be free.

In 1981, the pool received over $450,000 worth of renovations to correct structural and code defects. At that time the deep end of the pool was reduced from its original depth of 12 feet to 7 feet and diving was no longer allowed.

The pool was placed on the National Register of Historic Places on January 4, 1985.

Additional updates of the pool in 1997 reduced the deep end to 5 feet and added heating equipment and several play structures.

Skip back to main navigation